As villagers will know, the United Reformed Church will be closing shortly and members would like to thank all friends who have helped us in the past.

I should like to thank the many people who have sponsored me on my walks on behalf of the Church.

The Sunday Services for the Berrynarbor United Reformed Church will be starting in the afternoons at 3.00 p.m. as from Sunday, 6th October.

Ron Toms would like to thank everyone who sponsored him for his walk when he raised £720 for the Church, and a special thanks to Josef Belka who drove him to the far flung corners of the village, not as part of his walk but in his efforts to raise sponsorship!

Advance Notice: There will be a Coffee Morning in the Manor Hall on Saturday, 7th December, from 10.30 a.m. to 12.00 noon. Various stalls cakes, bring-and-buy, raffle, etc.

The Harvest Service will be held on Sunday, 22nd September, at 6.00 p.m., lead by Mr. Peter Ellis with music solo by Gerry Marangone. The sale of produce, and a cup of coffee, will take place on Monday, 23rd September, at 10.30 a.m. in the Chapel Meeting Room. Everyone is welcome.

Remember, if you have not already been caught, Ron Toms Will be round to collect sponsorship for his annual walk in aid of Chapel funds. Please give him your generous support. Many happy returns, Ron, on your 80th Birthday'

Sunday Services have now gone on to the summer time and begin at six o'clock.

There will be a Garden Coffee Morning at Fuchsia Cottage on Thursday, 27th June, from 10.30 a.m. to noon. Stalls will include Bring and Buy, Bric-a-Brac and Cakes and there will be a Raffle. Proceeds in aid of Chapel Funds. If the weather is not suitable for being in the garden, the morning will take place in the Manor Hall.

Warning! Ron Toms is on the move again! He will be repeating his sponsored Walk in aid of Church Funds and plans to come round to collect sponsors in the very near future. Can he really surpass last year's magnificent total of £700. With your help he could - so please give generously. Ron travels almost as far collecting sponsorship as he does on the walk itself!

The Harvest Festival will be held on 24th September when the Rev. Bates will be taking the service. There will be no Monday Servicer but during the morning, from 10.00 until 12.00 0'clock, there will be a Sale of Produce.

Members of today's Chapel are holding a CHRISTMAS BAZAAR in the Manor Hall on Saturday, 4th December, at 2.00 p.m. All welcome.

Winter Services will start at 3.00 p.m. from 4th October. Everyone welcome. 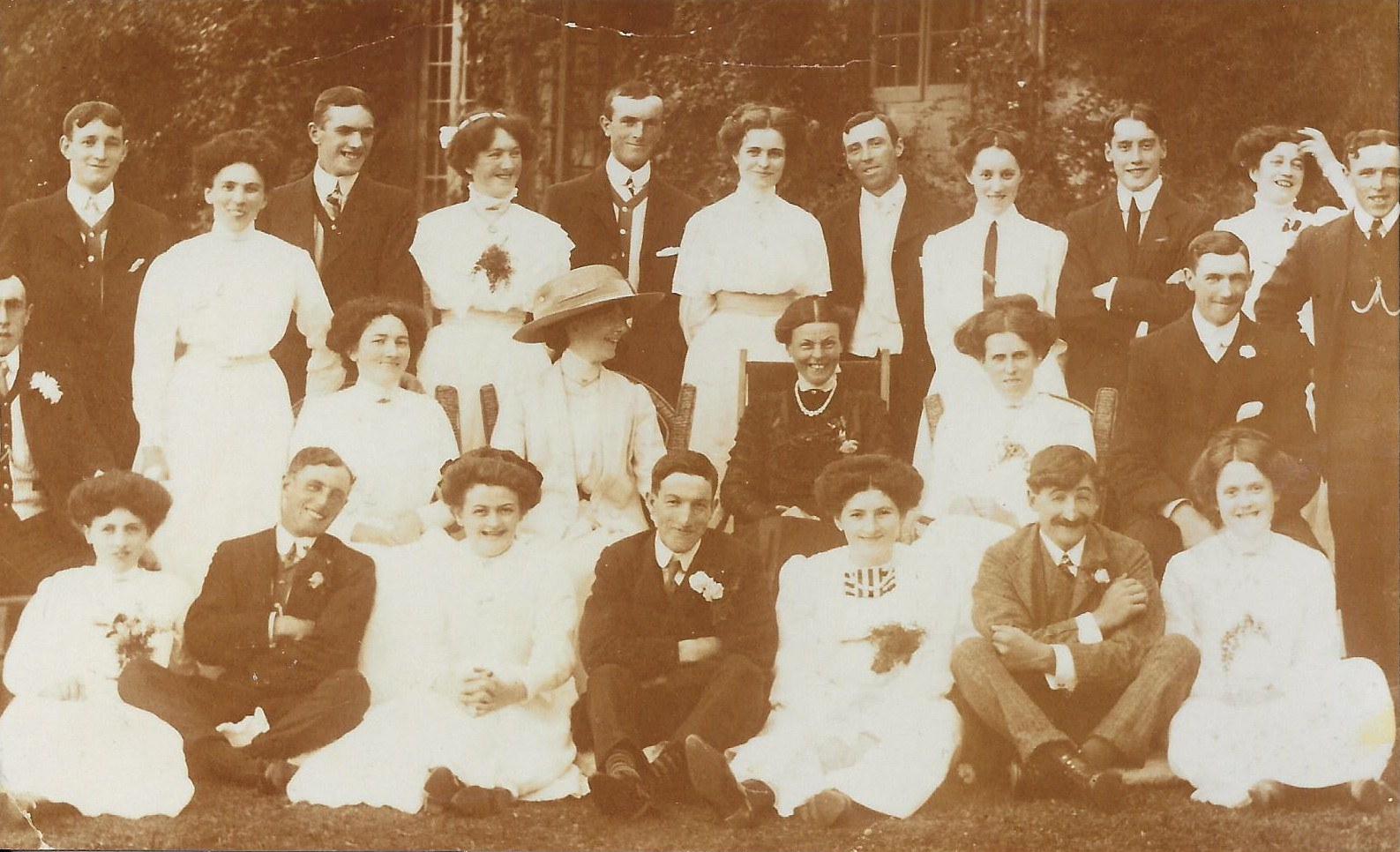 In response to the picture of Miss Harris's dancing class in the April issue (see the article in edition 17 here) , two interesting letters have been received.

I can remember both of them talking of the dancing class and the fun they used to have, particularly as Miss Harris insisted that they were dressed correctly.

I do not know the exact date of the photograph, but I do know that it would have been before 1914. My father was in the North Devon Huggars and wag in the Army before the First World War broke out. He was 24 In 1914 and from the photographs I have of him then, and the photograph you reproduced, he looked much younger, go I would think that the date is not not much later than 1906 when he would have been 16."

The dancing classes were held in the Temperance Hall that was situated at the back of Orchard House. It was owned by the Church and no alcoholic drinks were consumed. Fred Ley became so good with his dancing that he helped Miss Harris teach until he married in 1912 and moved to Braunton. The Rector also held Bible Classes for young men in the Hall. Many went on to serve in the 14-18 War, Jim Ley being one.

I think there are ruing of the Hall still visible."

Services are now held at 3.00 p.m. for the winter months and until May. Everyone is welcome.

There will be a Christmas Bazaar on Saturday, 7th December, at the Manor Hall, 2.30 p.m. Various Stalls, Raffle and Refreshments.

Services will start at 3.00 p.m. as from the 7th October. Everyone welcome.

A Jumble Sale will be held on Saturday, 13th October, at the Manor Hall, 2.30 p.m. to raise funds for the Church.

Sunday Services for the summer [as from 1st May] are now held at 6.30 p.m. All welcome.

The Sunday Services will be at 3 o'clock starting on Sunday, 1st October. On Monday, 2nd October, our Women's Guild starts at 2.30 p.m. and we should welcome anyone who would like to come along.

We are holding a Jumble Sale on Saturday, 14th October, at 2.30 p.m. and should be pleased to receive any jumble or items for the White Elephant Stall.

Ron Toms would like to thank everyone who sponsored him for his walk for Devon Historic Churches - he raised £275.25.

Services 6.30 p.m. each Sunday through the summer. Afternoon services will begin again in October details in the next Newsletter.

The Chapel hope to hold a Jumble Sale, possibly at the end of August. Please watch out for notices giving details.