WHERE HAVE OUR GREENFINCHES GONE?

I sometimes get asked why Greenfinches have disappeared from many of our gardens. Certainly in the 12 years that Tim Jones and I have lived at Harpers Mill we have noticed fewer Greenfinches in and around the village, as well as at Smythen Farm. For some reason Greenfinches are only infrequent visitors to our garden, despite lots of apparently suitable habitat. Among several diseases which affect birds, one in particular, trichomonosis, has been the principal cause of the decline in Greenfinches, and to a lesser extent Chaffinches.

Trichomonosis typically causes disease at the back of the throat and in the gullet. Affected birds show signs of general illness, such as lethargy and fluffed-up plumage, and may show difficulty in swallowing or laboured breathing. Some individuals may have wet plumage around the bill and drool saliva or regurgitate food that they cannot swallow. In some cases, swelling of the neck may be evident. The disease may progress over several days or even weeks. It does not affect humans or other mammals.

An item on the British Trust for Ornithology's website in mid-September reported new research that brings our understanding of the disease outbreak up to date.

The widespread emergence of trichomonosis in 2006 has resulted in a substantial decline in the Greenfinch breeding population. The new research demonstrates that mass mortality in Greenfinches continued in 2007-2009 at a rate of more than 7 per cent of the population each year, but with a shifting geographical distribution across the UK. In this time the population of Greenfinches in Great Britain fell from some 4.3 million to about 2.8 million birds. It appears that the disease jumped from pigeons or doves to finches, but quite why Greenfinches suffered more than other small birds remains unknown.

For more information on trichomonosis and other bird diseases, visit the BTO website at www.bto.org and follow these links: home > volunteer-surveys > garden birdwatch > gardens & wildlife > birds > disease. This will take you to a page on 'Disease and garden birds'. Here you will find advice on what you can do to look after your garden birds, especially the need to keep feeders clean. If you would like to report finding dead garden birds or signs of disease in garden birds, there is also an online reporting form. 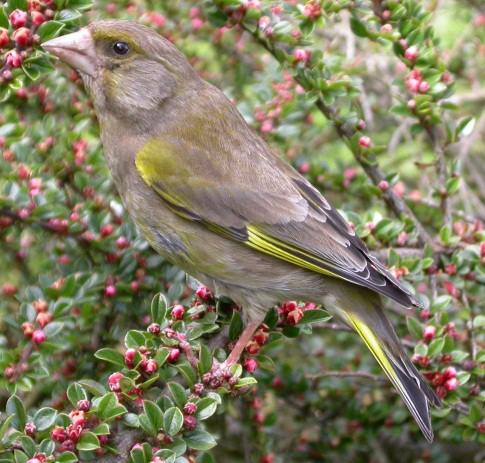 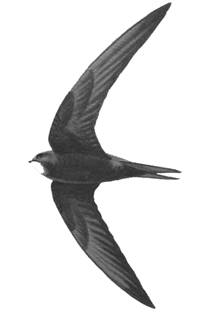 Most Berrynarbor residents will be familiar with Swifts, which arrive in the from African wintering quarters each spring, usually towards the end of April or early May. The combination of long, scythe-like wings and short, forked tail make them fairly easy to distinguish from Swallows and House Martins.

In addition, their habit of [literally] screaming at high speed low over rooftops, often in small parties, especially towards dusk, makes them unmissable to anyone out and about the village.

Swifts are the most aerial of birds. They feed on flying insects and never perch on wires like Swallows. In fact, once a young Swift has fledged, it is unlikely to land anywhere until it reaches maturity and looks for a nest site of its own three or four years later. But finding that desirable location in which to nest is becoming increasingly hard for Swifts. Their nesting places, in the eaves of rooftops and older buildings with cavities, such as the Manor Hall, are disappearing as buildings are modernised and access to roof spaces blocked up.

Ten years ago, when Tim Jones and I came to live in the , Berrynarbor played host to about ten pairs of Swifts. This year, during May and June, we saw no more than six Swifts over the village - with luck, three breeding pairs. In late July we counted 14 birds, including newly fledged juveniles - hopefully, the progeny of these pairs. For us to see the same birds over Berrynarbor next year, they must now survive a long flight to winter in African skies south of the , and then the return journey next spring. Their mastery of the air and their ability to fly at great height means that they have few predators. The most serious threats to the species' survival are fewer breeding sites and declining populations of aerial insects, their sole food source. 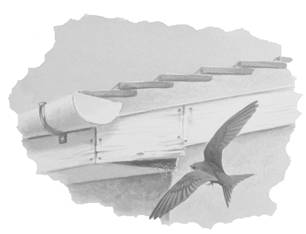 Now, we have a chance to help them. As some of you may have seen in a recent issue of the North Devon Journal, a conservation project has been launched within the North Devon Area of Outstanding Natural Beauty

[AONB] to help Swifts. With funding from the North Devon AONB, researcher Greg Ebdon has been visiting villages within the AONB to record the numbers of Swifts and the location of nest sites, as well as looking for appropriate sites where specially constructed Swift nestboxes can be put up. Four nestboxes have already been installed at St Helen's Church in Abbotsham, for example.

If you would like to encourage Swifts to nest within the eaves of your house or on the wall under the eaves, you can obtain a nestbox from Greg by contacting him on greg_ebdon@hotmail.com. Note that because Swifts need height to take off, single-storey buildings are not suitable; nest sites are usually located at least six metres from the ground. Once a nestbox has been installed, to stop other birds using it, the opening can be blocked until the Swifts return. If you are unsure whether your house is suitable, I should be happy to give advice. You can contact me on 882965 [daytime] or 883807 [evenings/weekends] or at tim.davis@djenvironmental.com.

For more information on Swifts, including a short video and a sound recording of their calls, visit www.rspb.org.uk/wildlife/birdguide/name/s/swift.

THE BIRDS OF LUNDY

Lying some ten miles off the nearest point on the coast, its eastern side washed by the and its western slopes open to the heavier rise and fall of Atlantic rollers, Lundy is one of the finest places in to watch birds. Mostly famed for its Puffins, which still breed there in small numbers, Lundy attracts migrating birds in sometimes huge numbers and, as a result, is a magnet for birdwatchers from far and wide.

We - that is the Tims of Harpers Mill - have been visiting Lundy for more than 50 years between us. The idea to write a new book on the island's birds first struck in 1999. Initially we contacted former Lundy Warden Nick Dymond to ask if he had any plans to update his own book on Lundy's birds, published by Devon Bird Watching & Preservation Society in 1980. At that stage Nick was part way through revising the text but, as he put it, 'running out of steam' and with many other things on his plate. Nick kindly forwarded his notes, giving us a great starting point. In the intervening years, as well as scouring every Lundy Field Society (LFS) Annual Report, Devon Bird Report and the surviving LFS logbooks from the island, we have researched every scrap of information we could find. This included a fascinating visit to the Alexander Ornithological Library in to delve into a variety of very old, rare or otherwise specialised references.

Most of the work has been done in our spare time, but, conscious of the years passing by, we began to step on the accelerator in 2005 until finally, in February this year, we completed the manuscript. Since then we've been polishing it and adding bird records for 2007. We took the book to the printer, Short Run Press Limited of , on 29th August. As chance would have it, on that very day a Water Rail chick was found in Millcombe - proof that Water Rails had bred for the first time ever on the island. Happily we were able to include the news at proof stage and Water Rail became the 68th species known to have nested on Lundy.

The Birds of Lundy itself fledged on 29th September at a launch at RM Young (Bookseller) in .

The goals we set ourselves in preparing the book were:

Whether we succeed in all of these objectives only time will tell. The immediate result is a detailed account of the 317 species that currently make up the Lundy bird list, plus a further 36 species which for various reasons do not qualify for the full list. Internationally renowned biologist Hugh Boyd, who began his ornithological career as LFS Warden in 1948/49, has penned the book's foreword. [Health permitting, Hugh will be staying with us on the island this October.]

As well as writing the book, we also published it on behalf of Devon Birds and the LFS. Both organisations contributed grants to cover the printing costs, and we are grateful also to several other individuals and organisations that have supported the book financially. All are acknowledged within the books 319 pages, which are enlivened by 20 colour photographs and more than 100 line drawings by wildlife artist Mike Langman. The book is available in two formats: a paperback which retails at £18.95 and a limited edition hardback at £35.00. All proceeds from sales will go to conservation on the island. A paperback copy is available for view in the Berrynarbor Community Shop, and orders for copies may be placed; a percentage of each book sold will go to the Shop.

For more information visit www.birdsoflundy.org.uk or contact us on 882965 [daytime] or 883807 [evenings and weekends].

If you have thought about going to Lundy but have yet to do so, we hope that The Birds of Lundy might inspire you to step onto the island boat, MS Oldenburg, and off at the other end onto the jetty. Aside from the birds, a place of peace and tranquillity awaits you.