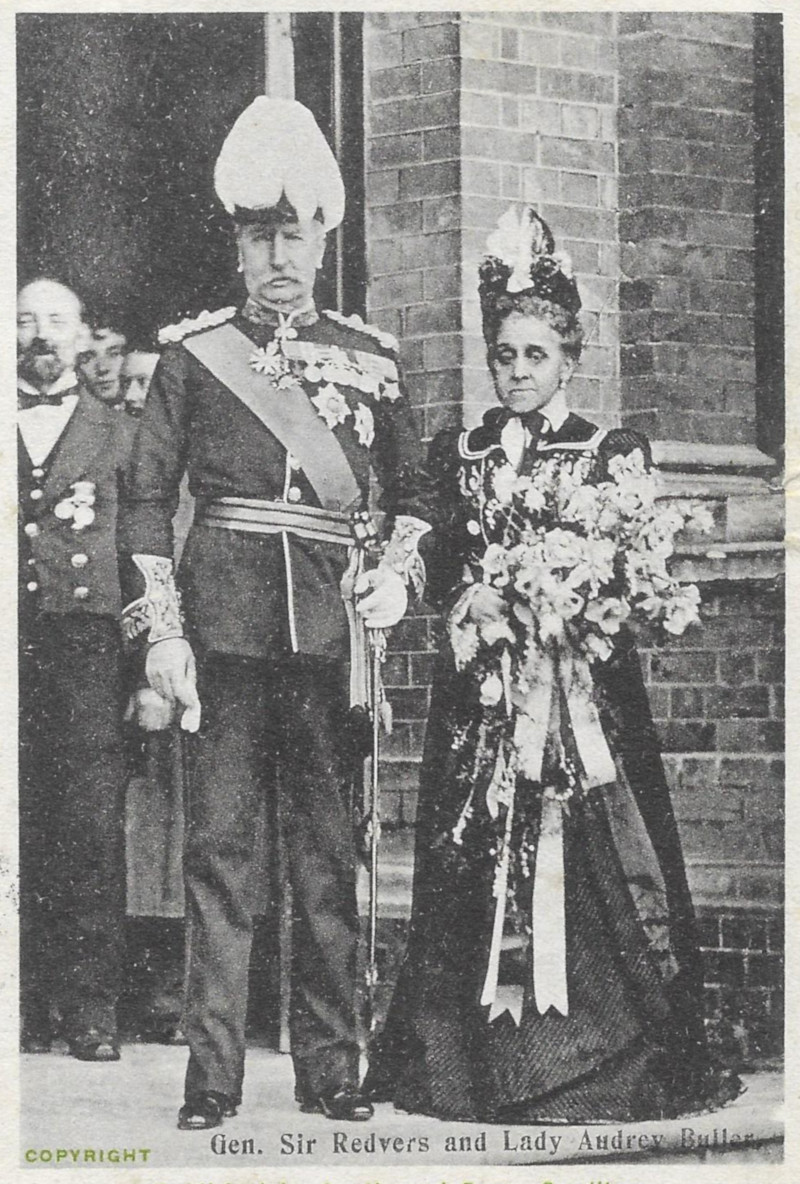 Redvers Buller was born on 7th December 1839 at Downes, Crediton, the son of James Wentworth Buller, MP. One could say he was born with a silver spoon in his mouth, and once he had completed his schooling at Eton in 1858, he was commissioned into the King's Royal Rifle Corps, 60th Rifles.

The battles and wars he served in are far too numerous to mention here but the main ones were the Zulu War of 1879, for which he was awarded the Victoria Cross for bravery under fire, and following his involvement with the First Boer War of 1881 and as Head of Intelligence in the Egypt Campaign in 1882 he was knighted. That year he married Audrey, daughter of the f4th Marquess Townshend and later in the year was sent to the Sudan as Commander of an infantry brigade. In 1885, having commanded a successful expedition to relieve General Gordon, he was promoted to Major General.

In 1899 he w-as sent as Commander of the Natal Field Force on the outbreak of the Second Boer War. Following several defeats and concerns about his performance, in 1900 Lord Roberts replaced him as overall Commander in South Africa. 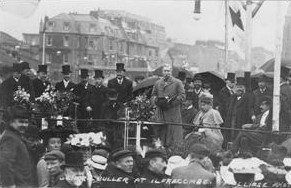 General Buller was very popular amongst the public in England and upon his return from South Africa was given a triumphal reception and many public celebrations. Sadly, in October 1901 he was asked to resign but refused and was dismissed on half pay. On 27th July 1904, General Buller gave a speech at the Inauguration Ceremony of Ilfracombe's new water supply when several other dignitaries were present, including Lord Ebrington, Lord Clifford, local MP E.J. Soares, and Council Chairman J.C. Clarke.

Throughout the West Country there were public expressions of sympathy for him. Indeed, in 1905, by public subscription, a notable statue of General Buller astride his horse was erected in Exeter, on the road leading out to Crediton.

Despite being offered a parliamentary seat when the Liberals returned to power in 1905, he turned it down in favour of peaceful retirement at his

family seat Downes House, Downes, Crediton, where on the 2nd June 1908 he died. He was buried at the Holy Cross Churchyard, Crediton and his funeral must have been one of the largest ever held in Devon, as is shown by the many postcards published at the time. 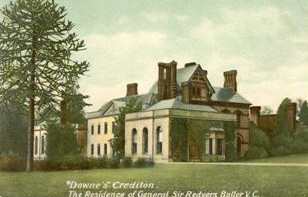 Many of the photographic postcards that I've used to illustrate my 'Old Berrynarbor' articles were the work of John William Garratt.

He was born on in , and died at the age of 81 on in . His father, William Leonard Garratt, was a County Court clerk and his mother, Jane, was formerly Booth.

We can assume that Garratt lived with his parents, probably in , until he was 21 years old. At the age of 26, he married Mary Jane Eccles, who was 27, at the Parish Church of All Saints, Heaton Norris, Lancaster, in the Registration District of Stockport.

John and Mary Jane moved to 'Stepleton View', , Ashley Down, , in 1899, and according to the Bristol Trade & Residents Director, the occupiers of were:

* As already stated, Garratt died in October 1946, so the entry was not amended!

Their daughter, Alice Mary, was born on , at home, and she was still living with her parents at in 1939, when she would have been 31 years old.

John William Garratt was an accomplished photographer and all of his real photographic [RP's] postcards are sought after by collectors all over the . He would carry his large tripod and glass plate cameras in his motorcycle's wicker-work sidecar as shown in this picture of him with his daughter Alice outside Horfield Barracks, .

Garratt has left a permanent photographic record and is known to have taken and published approximately: 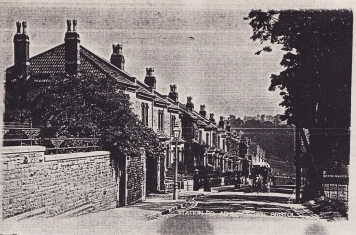 Garratt was a master at composing his photographs always attempting to include children and adults. We should remember that in those early days, he had to get participants to stand absolutely still for up to two minutes whilst he took the photograph on large, glass plates - no rolls of film or digital cameras in those days!

I must thank the late Alan Richardson for obtaining copies of various Birth, Marriage and Death Certificates for John William Garratt. 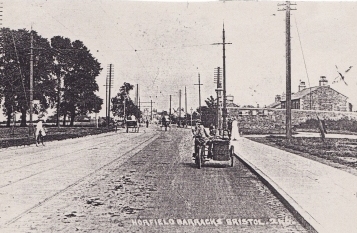 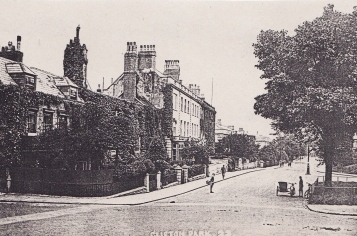 THE FIRST CAMPS IN

Many of us would imagine that the first holiday camp would be one of those opened by Billy Butlin, who was later knighted by the Queen to become Sir Billy Butlin, but they would be mistaken.

In truth, Joseph Cunningham, a successful flour dealer and baker from and his wife, Elizabeth, moved to the in the 1890's. They opened summer camps in 1892 and 1893 in Laxey, but in 1894 they opened an all-male, tented summer camp in Howstrake, I.O.M. for up to 600 men per week. The success of these holiday camps was largely down to the organisational ability of Mrs. Cunningham that led them in 1904 to acquire five acres of agricultural land at , near Falcon Cliff. Here 1500 tents and a 100 foot dining pavilion were erected for the March to October season. Shortly after the First World War commenced, internees were given the job of replacing many of the original wooden huts for chalets. In September 1914, the camp was cleared of its campers and staff and requisitioned as an internment camp for enemy aliens.

I found this information as a result of purchasing, through e-Bay, a quantity of postcards, which included three of 'The Cunningham Camp, , '. 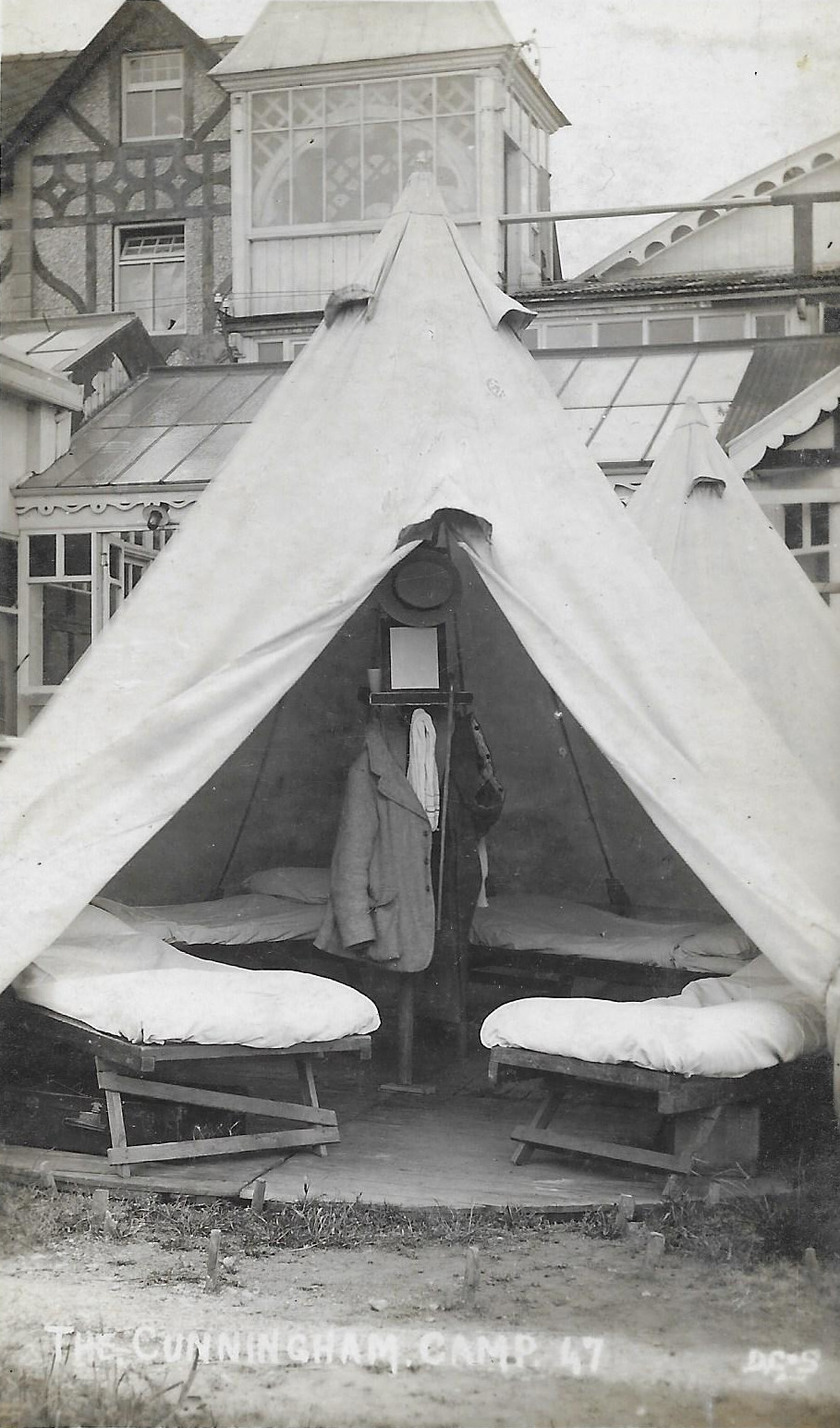 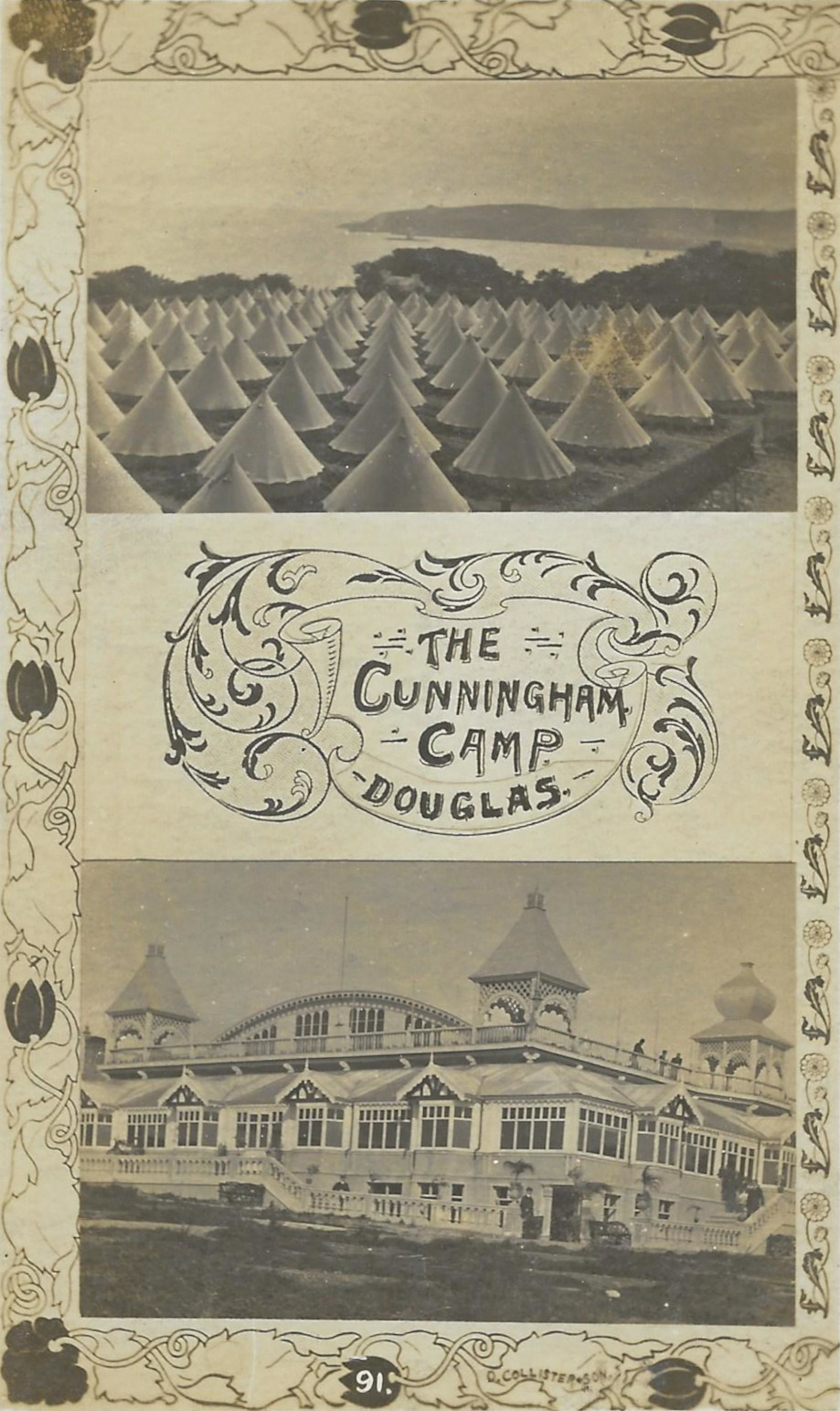 The daughter of Charles Mackay, a Scottish poet and song writer, the novelist Mary spent her youth in Mickleham, Surrey, before moving to in 1882. She was a talented pianist, using the name Marie Corelli for performances, but turned to writing romantic fiction using the same pseudonym. Her first novel was published in 1886.

Her romantic melodramas, written with exuberant imagination and far-fetched theories, enthralled her readers and she achieved outstanding success at the turn of the century, with Queen Victoria, and Wilde among her admirers, but her popularity turned to ridicule long before her death in 1924.

The Mighty Atom, published in 1896, was written and set in North Devon, with the character Reuben Dale being based on James Norman, the Sexton of the in Combe Martin.

Her over-the-top characterisations made even the weakest plots come alive and although her work lack literary quality, her greatest achievement is that with over 20 novels to her credit, she still commands a place in the study of women's literature.

Finally, can I appeal for pictures, preferably postcard based, of Berrynarbor up to the 1980's as it is becoming increasingly difficult to come up with something about which I have not already written. 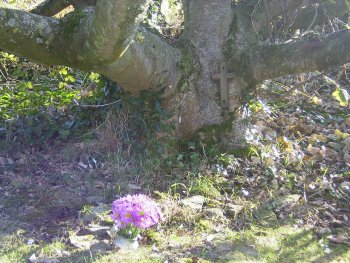 My thanks to Jenny Taylor whose e-mail from her home in France gave clues sufficient to set me on the path to finding out the facts behind the small cross memorial on the coastal footpath near Widmouth House. My thanks also to Sylvia and Cecil Hancock, and to Marie Chugg.

Marie lived at Widmouth for 27 years and the cross is in memory of her mother, Mrs. Madeline Leng, and her uncle Mr. Leonard Elderfield, both of whom spent happy times at Widmouth. Marie, who has very happy memories of times they all spent there, regularly places flowers under the tree. Marie's son, Paul, still lives in Ilfracombe.

Once again my thanks to all concerned for solving the mystery.

This photograph was taken on the short but strenuous footpath walk from Watermouth Cove to the Coast Guard Houses. We have often

walked this particular path and noticed fresh flowers placed near the cross, which is just after the footpath style near Widemouth House. I wonder if anyone can inform me why, when and in whose memory the cross was placed there.

On our walk with Colin and Doreen on Sunday, 20th November, Inge was the first to spot a seal surfacing and feeding off the headland at the entrance to Watermouth Harbour. My thanks to Colin for taking the photograph at my request when my camera stopped working due to a low battery!

I do hope someone can throw some light on the memorial.